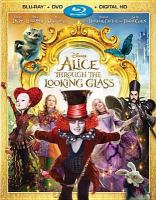 Alice through the looking glass [videorecording] /

Alice (Mia Wasikowska) returns to Wonderland after finding success in the real world as a ship's captain, only to discover that the Mad Hatter (Johnny Depp) is suffering from severe depression. Eager to help her friend, she steals a time-travel device called the Chronosphere and journeys into the past in order to save the Hatter's family. Elsewhere, the deposed Red Queen (Helena Bonham Carter) also attempts to go back in time and heal old wounds. Anne Hathaway, Alan Rickman, Sacha Baron Cohen, and Michael Sheen co-star. James Bobin (The Muppets) directed this time around, taking over from Tim Burton (who helmed 2010's Alice in Wonderland). ~ Jack Rodgers, Rovi

Based on characters created by Lewis Carroll.

Rating: PG; for fantasy action/peril and some language.

Alice returns to the whimsical world of Wonderland and travels back in time to save the Mad Hatter.