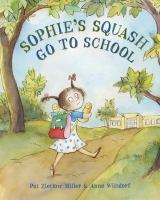 This charming sequel to the beloved Sophie's Squash is the perfect antidote to the back-to-school jitters. Sophie goes to school for the first time and has no interest in making friends that aren't squash. Here's a gently humorous read-aloud that proves that making friends, just like growing squash, takes time.<br> <br> On Sophie's first day of school, nobody appreciates her two best friends, Bonnie and Baxter, baby squash that she grew in her garden. Even worse, one classmate, Steven Green, won't leave Sophie alone. He sits by her at circle time. He plays near her during recess. And he breathes on her while she paints. Steven just wants to be friends, but Sophie isn't interested. Still, Sophie knows that her squash friends won't last forever. Maybe it would be nice to have some human friends after all. . . .

On her very first day of school, Sophie is reluctant to make friends with the other children, preferring to play with two squash she grew in her garden--but when a particularly persistent boy named Steven gives her a packet of seeds as an apology for accidentally ripping her picture, she realizes that it just takes time to grow a friend.

In Sophie's Squash (rev. 11/13), Sophie spends a lovely summer and fall with her best (inanimate) friend, a farmer's market butternut squash she names Bernice. During winter, Bernice "rests" in the ground; the following summer, Sophie harvests two new squash besties. Now those next-generation comfort objects, Bonnie and Baxter, see Sophie through a new adventure: learning how to be a friend. Unhappy about starting school, Sophie is firm about one thing: Bonnie and Baxter are "all the friends I need." She rebuffs the other children's welcoming overtures, especially Steven Green's persistent attempts. Both the text and illustrations treat quirky-kid behavior and foibles matter-of-factly and respectfully, making pigtailed Sophie a sympathetic character even when she's acting disagreeably. Wilsdorf's loose-lined watercolor and ink illustrations include lots of kid-focused details on every page and root the story firmly in a child's world of small dramas and big feelings. Over time, cracks appear in her resolve to keep all nonsquash at arm's length, but Sophie stubbornly stands her ground, even after Bonnie and Baxter go down for their "winter nap." In the end, tenacious Steven Green, who doesn't give up on Sophie despite her harsh treatment, ultimately triumphs -- as does Sophie, who concludes, "Sometimes growing a friend just takes time." kitty flynn(c) Copyright 2016. The Horn Book, Inc., a wholly owned subsidiary of Media Source, Inc. No redistribution permitted.