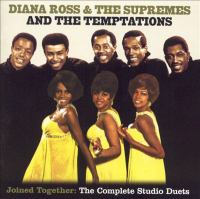 The two albums the Supremes and the Temptations did together in the late '60s might have been fun to do, and sometimes fun to hear, but certainly weren't highlights in the career of either group. If you're going to hear them at all, however, you should do so in the context of this two-CD set, which leaves no stone unturned in its presentation of not just the original albums (1968's Diana Ross & the Supremes Join the Temptations and 1969's Together), but also a bunch of previously unreleased tracks and alternate mixes. The albums themselves were uneven, relying too heavily on so-so covers of hits by other artists, remakes of some old Motown smashes, and the odd inappropriate MOR hit and popular standard, though the number two hit "I'm Gonna Make You Love Me" (from the first of the LPs) was a highlight. Particularly on Together, there were also some odd trendy production flourishes, like the electric sitar in "The Weight," the freak-out fuzz guitar and quasi-Eastern psychedelic effects that open "Uptight (Everything's Alright)," and the funk-rock cover of Sly Stone's "Sing a Simple Song." As for the bonuses on this CD, all of the previously unreleased tracks come from the sessions for Diana Ross & the Supremes Join the Temptations, and in both the good and bad senses are characteristic of the songs chosen for the released album. They muster fair covers of the Beatles' "Got to Get You into My Life" and the Impressions' "Amen," and do a strange medley of "You Can't Hurry Love/You Keep Me Hangin' On" with some fierce psychedelic-tinged rock guitar on the fadeout. On the other hand, it was a wise decision to excise the too show bizzy medley of Supremes hits, and not such a wise decision to make it the opening cut on this CD compilation. The nine alternate mixes, in the way these things usually turn out, aren't compulsory listening for anyone but fanatics, though there are a few notable differences: "I'm Gonna Make You Love Me" has a spoken introduction by producer Frank Wilson, and "Can't Take My Eyes Off You" has Mary Wilson handling all the solo vocals. Note that these aren't the only extras on this set: it also offers previously unavailable extended versions of "I Second That Emotion" and "Then" (from Diana Ross & the Supremes Join the Temptations) and "Why (Must We Fall in Love)" (from Together). Finally, to close things out there's a previously unreleased extended alternate mix of "Not Now, I'll Tell You Later," a 1963 Temptations recording with background vocals by the Supremes. ~ Richie Unterberger

Diana Ross and the Supremes, the Temptations, vocals ; with accompanying musicians.