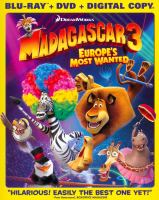 Originally released as a motion picture in 2012.

MPAA rating: PG; for some mild action and rude humor.

Your favorite characters are back in their most hilarious adventure yet! Alex, Marty, Melman and Gloria are on the run through Europe in this wildly-entertaining and outrageous comedy critic's call 'charming and very funny'! With the fame-loving King Julian and take-charge Penguins, the whole crew joins the circus to escape Captain Dubois of Animal Control.