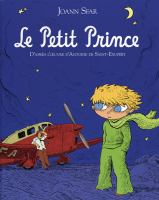 FRENCH EDITION. For over sixty-five years Antoine de Saint-Exupéry's The Little Prince has captured the hearts and minds of its readers. The whimsical story with a fairy tale touch has sold over 80 million copies in 230 languages. This exciting graphic adaptation features beautiful, new artwork by Joann Sfar. Hand-chosen by Saint-Exupéry's French publishers for his literary style and sensitivity to the original, Sfar has endeavored to recreate this beloved story, both honoring the original and stretching it to new heights. A vibrant, visual gift for longtime fans and those experiencing the story for the first time.

Originally published in 2008 by Gallimard Jeunesse.

A graphic novel version of the story of an aviator whose plane is forced down in the Sahara Desert where he encounters a little prince from a small planet who relates his adventures in seeking the secret of what is important in life.