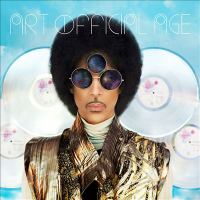 Prince returned to Warner Bros. Records in a big way in 2014, settling a 15-year feud on terms that were decidedly in his favor. He acquired the rights to his masters, agreed to a series of deluxe reissues, and released two brand-new albums, one recorded on his own and one recorded with his backing power trio 3rdEyeGirl. Art Official Age, the album credited to his lonesome, finds Prince reveling in many of the sounds of the '80s, reviving his Bob George and Camille voices, dabbling in deep electro-funk on "What It Feels Like," indulging in a full-fledged freakout on "Funknroll." Despite all these winking allusions to his past, Art Official Age feels of piece not with the Revolution but rather the New Power Generation: underneath the squalls of guitar, psychedelic soul harmonies, and impish humor, this is a full-fledged R&B album, one that often echoes Diamonds and Pearls. Like that 1991 record, Art Official Age is heavy on dance songs with rapped verses that don't feel informed by hip-hop and slow-burning soul that pulls the past into the present. Some of Prince's modernization feels a bit ham-fisted -- he turns the Internet meme "This could be us but you playing" into a slow jam -- but he leaves all his millennial flirtations at the margins of the record, grounding it in old-fashioned notions of seduction and soul. If the album doesn't offer any startling surprises along the lines of the furious "Black Sweat" -- there's not much abandon here -- there's joy in hearing Prince embrace his lyrical eccentricities as he accessorizes his smooth jams and coiled, clean funk with such oddities as laser blasts and spoken introductions from what appear to be British nurses. Such quirks may be fleeting but their presence is enough, along with such fine songs as "Breakfast Can Wait," to elevate Art Official Age above 20Ten and other pro forma latter-day Prince records. ~ Stephen Thomas Erlewine

Performed by Prince ; with accompanying musicians.

Prince returns with a contemporary concoction of soul, R&B, and funk with immediate and prominent melodies. Prince's vocals are rich and solid, taking full advantage of his vocal range with decidedly seductive lyrics.