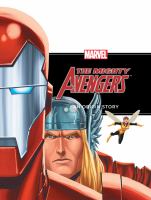 The mighty Avengers : an origin story /

When the world is overwhelmed with Super Villains, time traveling conquerors, alien invaders, mythical beasts and robots bent on the total destruction of humanity . . . the Earth calls upon its Mightiest Heroes: THE MIGHTY AVENGERS! Be here to witness the origin of the team as Iron Man, Thor, the Hulk, Ant-Man, and the Wasp assemble into the ultimate force for good!

"Based on the Marvel comic books series "The mighty Avengers."

Presents the story of how Iron Man, Thor, Ant-Man, and the Wasp worked together to keep the Hulk from being destructive due to the trickster god Loki's schemes and decided to form the Avengers after seeing how well they worked together to handle an enemy that was too big for one of them alone.