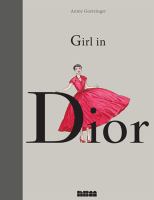 Winner of: <br> YALSA 2016 Great Graphic Novels for Teens<br> <br> In February of 1947, the crème de la crème of Paris haute couture have flocked to see Christian Dior's debut fashion show. In a flurry of corolla shaped skirts, the parade of models file down the runway and the mesmerized audience declares the show a triumph. When Clara--a freshly hired chronicler and guide to the busy corridors of the brand-new fashion house--is hand-picked by Dior to be a model, she knows her life will never be the same. A biography docudrama that marries fiction with the story of one of the greatest couturiers in history, this work is a breathless and stunning presentation of Christian Dior's greatest designs, beautifully rendered by bestselling artist Annie Goetzinger.

"The Girl in Dior is Clara, a freshly hired chronicler, fan of fashion and our guide in the busy corridors of the brand new house of Christian Dior. It's February 12, 1947 and the crème de la crème of Paris Haute Couture is flocking to the momentous event of Dior's first show. In a flurry of corolla shaped skirts, the parade of models file down the runway. The audience is mesmerized: it's a triumph! Carmel Snow of Harper's Bazaar cries out: "It's quite a revolution, your dresses have such a new look!" Dior's career is launched and Clara's story begins. Soon, she is picked by Dior himself to be his model" -- provided by publisher.

Christian Dior's "New Look" of 1947, his debut collection, went by a more evocative French name: Corolle, petals of a flower. After the fabric-sparing styles of World War II, these elitist, extravagant hourglass dresses were designed to make every woman "feel as beautiful as a duchess," as the designer put it. Goetzinger (Agence Hardy) creates a fictional narrator, young journalist Clara, who takes us inside the House of Dior as a model. It's taxing, complicated teamwork creating 200 designs to be culled into nearly a hundred new dresses twice a year, and we meet -Dior's staff, the steel-eyed fashion journalists, rich clients, and hovering celebrities. The lovely watercolor art portrays the clothes with affectionate romanticism; many drawings are splashed over one or two pages, as when assistants lower fabulous evening gowns down from the balcony into the models' dressing room. VERDICT More homage than biography or nuanced analysis, this beautifully rendered work skimps on depth and social issues. However, the comprehensive back matter fills in plenty about the designer and his fashion world. Haute couture fans will appreciate this; it is also recommended for collections on the garment industry and the postwar period.-M.C. © Copyright 2015. Library Journals LLC, a wholly owned subsidiary of Media Source, Inc. No redistribution permitted.