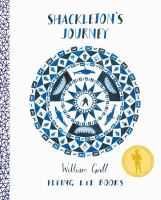 Young up and coming illustrator William Grill brings us a detailed visual narrative of Shackleton's journey to Antarctica.Grill's beautiful use of coloured pencils and vibrant hues places him somewhere on the artistic spectrum between Raymond Briggs and David Hockney and his fastidious cataloguing of every single detail of the expedition is nothing short of a Blackstock collection. He manages to evoke the atmosphere and intrepid excitement that would have surrounded the expedition with his impeccably researched, detailed and atmospheric drawings. Children will love examining the exploded diagrams of the now peculiar provisions taken and the individual drawings of each sled dog and pack horse. This book takes the academic and historical information surrounding the expedition and reinterprets it for a young audience in a way that will capture their imaginations.

Presents a visual narrative of Ernest Shackleton's voyage to Antarctica during which his ship, the Endurance, became trapped in ice, forcing the crew on a desperate trek to seek rescue.