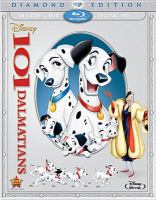 One hundred and one Dalmatians /

Pongo, Perdita and their super-adorable puppies are in for thrills, hilarious spills and an epic action-packed adventure when they face off with Cruella De Vil, Disney's most fabulously outrageous villainess. When Cruella dognaps all of the Dalmatian puppies in London, brave animal heroes launch a daring plan to save all puppies from Cruella's clutches! Unleash all the excitement and suspense of a beloved classic you'll want to share with your family again and again!

English, dubbed French or dubbed Spanish soundtracks; optional French, Spanish or English subtitles for the deaf and hard of hearing.

Based on the book "The one hundred and one dalmatians" by Dodie Smith.

Originally produced as a motion picture in 1961.

Pongo and Perdita have a litter of 15 Dalmatian puppies. Cruella De Vil takes a fancy to the puppies and tries to buy them from their human owners, Roger and Anita. Cruella wants to get a hold of those puppies, as well as more puppies, to make herself a lovely dalmatian skin coat. She hires some thugs to kidnap the puppies and hold them at an abandoned mansion. Now Pongo and Perdita must use an animal communication system to help find all the puppies.