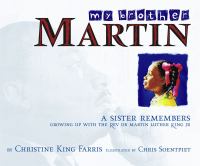 My brother Martin : a sister remembers growing up with the Rev. Dr. Martin Luther King Jr. /

Renowned educator Christine King Farris, older sister of the late Dr. Martin Luther King Jr., joins with celebrated illustrator Chris Soentpiet to tell this inspirational story of how one boyhood experience inspired a movement. <br> <br> Mother Dear, one day I'm going to turn this world upside down. <br> <br> Long before he became a world-famous dreamer, Martin Luther King Jr. was a little boy who played jokes and practiced the piano and made friends without considering race. But growing up in the segregated south of the 1930s taught young Martin a bitter lesson--little white children and little black children were not to play with one another. Martin decided then and there that something had to be done. And so he began the journey that would change the course of American history.

Looks at the early life of Martin Luther King, Jr., as seen through the eyes of his older sister.

(Primary) Before there was the Reverend Martin Luther King Jr., the world-renowned civil rights leader, there was M. L., the boy, fun-loving and often mischievous, who grew up in a sunny, wonderfully supportive household where he found encouragement and understanding. There have been many stories about his life, but none so personal and revealing as this memoir-tribute by his older sister, the last surviving member of the family that shaped his life and dream. Many of the books about Dr. King for young people, outstanding as some are, tend to place him on a pedestal; this book shows why and how that pedestal was built. By starting with early family reminiscences and building to the climactic moment when Martin first experiences the full meaning of the cruel segregation practices in the South, King Farris captures the drama of a life that would lead to the famous ""I Have a Dream"" speech. The text is direct and precise, extended by full-color page-and-a-half spreads executed in a realistic style, not unlike group portraits. Opening pages employ barely visible archival photographs in the background, lending an effect of times remembered to the ebullience of the pages to follow. The brilliance of the illustrations, the placement of the text, and the oversized format make this a dramatic addition to the collection of works for young audiences on Dr. King. With a poetic tribute to Martin Luther King by Mildred D. Johnson, an afterword, and an illustrator's note. (c) Copyright 2010. The Horn Book, Inc., a wholly owned subsidiary of Media Source, Inc. No redistribution permitted. All rights reserved.