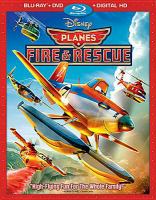 Adventure flies higher than ever before in this sequel that finds championship air-racer Dusty Crophopper (voice of Dane Cook) beginning an exciting new career fighting forest fires. In the wake of another successful racing season, Dusty returns home to Propwash Junction to resume his training. But a debilitating injury forces Rusty to consider a new career path. Before long Rusty is training with the Aerial Fire Fighters at Piston Peak Air Attack Base. Becoming a Single Engine Air Tanker (SEAT) is no simple task for an injured plane, but with the guidance of seasoned fire-and-rescue helicopter Blade Ranger (voice of Ed Harris), fearless leader of the Piston Peak Air Attack team, Rusty is soon soaring through the clouds once again. Meanwhile, as Rusty gets up to speed, his presence in the unit catches the attention of Dipper (voice of Julie Bowen), a cargo hauler-turned-water scooper capable of skimming lake water to combat raging fires. A major racing fan, Dipper can hardly contain her excitement at the prospect of working alongside Rusty, and meanwhile wise, heavy-lift helicopter Windlifter (voice of Wes Studi) has never encountered a fire he couldn't conquer. In no time Rusty has made a whole host of new friends at Piston Peak, including hulking transport plane Cabbie (voice of Dale Dye), the brave grounded firefighters known as the Smokejumpers, the Secretary of the Interior (voice of Fred Willard), and Nick "Loop'n" Lopez (voice of Erik Estrada), a helicopter cop with an illustrious past. And though learning the secrets to dousing forest fires is sure to take time, Rusty is a fast learner, and eager to pitch in. ~ Jason Buchanan, Rovi

DVD contains the feature film in standard definition and a limited selection of bonus features.

At head of title: Disney.

Videodisc release of the 2014 motion picture.

Originally released as part of a "Blu-ray + DVD" combo

Rating: PG; for action and some peril.

"When world-famous air racer Dusty learns that he may never race again, he must shift gears and is launched into the world of aerial firefighting"--Container.