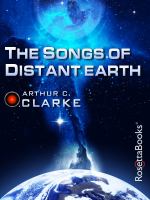 <p>More than two thousand years in the future, a small human colony thrives on the ocean paradise of Thalassa-sent there centuries ago to continue the human race before the Earth's destruction.</p> <p>Thalassa's resources are vast-and the human colony has lived a bucolic life there. But their existence is threatened when the spaceship Magellan arrives on their world-carrying one million refugees from Earth, fleeing the dying planet.</p> <p>Reputed to be Arthur C. Clarke's favorite novel, Songs of Distant Earth addresses several fascinating scientific questions unresolved in their time-including the question of why so few neutrinos from the sun have been measured on Earth. In addition, Clarke presents an inventive depiction of the use of vacuum energy to power spacecraft-and the technical logistics of space travel near the speed of light.</p>

Description based on print version record.