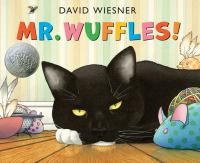 A 2014 Caldecott Honor Book In a near wordless masterpiece that could only have been devised by David Wiesner, a cat named Mr. Wuffles doesn't care about toy mice or toy goldfish. He's much more interested in playing with a little spaceship full of actual aliens--but the ship wasn't designed for this kind of rough treatment. Between motion sickness and damaged equipment, the aliens are in deep trouble. <p>When the space visitors dodge the cat and take shelter behind the radiator to repair the damage, they make a host of insect friends. The result? A humorous exploration of cooperation between aliens and insects, and of the universal nature of communication involving symbols, "cave" paintings, and gestures of friendship.</p>

"Mr. Wuffles ignores all his cat toys but one, which turns out to be a spaceship piloted by small green aliens. When Mr. Wuffles plays rough with the little ship, the aliens must venture into the cat's territory to make emergency repairs"-- Provided by publisher.

Is anything so fraught with potential energy as a stalking cat, or as relaxed as a bored one? Mr. Wuffles disdains all the playthings he's offered -- until, amongst scorned balls and catnip mice, he spies a small spaceship and, entranced, toys with it for a page of dramatically paced frames. A page turn reveals tiny, green-skinned creatures within, upended, regrouping, puzzling over how to repair the damage. Helped by a cat-diverting ladybug, they flee to the space under a radiator, which harbors a thriving insect civilization complete with wall paintings of ants and ladybugs confronting fearsome cats. Despite the language barrier (both the aliens' and the bugs' speech are cleverly represented in non-alphabetic speech bubbles), the aliens establish communication with the ants by adding pictures of their recent troubles to the wall. Friendship ensues, food and technology are shared, repairs are made, and the cat is foiled with a heroic escape engineered by insects and green folk working together. This exemplary Wiesnerian blend of ordinary and extraordinary incorporates the delights of Borrowers-style innovations, quintessential cat behavior, and Wiesner's own exquisitely fashioned art. Moving from the here-and-now to the what-if, he defines points of view with such devices as angled sightlines and wallpaper stripes, and the benignly graceful folds of the little green people's robes -- not to mention black Mr. Wuffles, sweet puss or terror depending on your point of view. Since this is pretty much wordless, it takes some poring over to decode the action and its potent, neatly understated message. It's well worth it. joanna rudge long (c) Copyright 2013. The Horn Book, Inc., a wholly owned subsidiary of Media Source, Inc. No redistribution permitted.