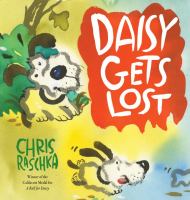 "A must for Daisy fans everywhere," declares School Library Journal in a starred review.<br> <br> With the same emotional intensity that he brought to his New York Times  bestselling, New York Times  Best Illustrated, and Caldecott Medal-winning picture book  A Ball for Daisy,  Raschka has created a story that explores fear as only he can. Any child who has ever felt lost will relate to Daisy's despair upon finding herself in an unfamiliar part of the park after chasing a squirrel. In a nearly wordless picture book, Daisy encounters the unease of being lost and the joys of being found. Raschka's signature swirling, impressionistic illustrations and his affectionate story will particularly appeal to young dog lovers, teachers, parents and, of course, the legions of Daisy fans out there.<br> <br> <br> From the Hardcover edition.

A young dog experiences the fear of being lost and the joys of being found when she becomes separated from her owner.

Back in the park for another almost-wordless adventure, Daisy the Caldecott-winning dog chases her new blue ball with gusto until she spots a tempting squirrel, and the ball is abandoned as a new chase ensues. Fluid watercolor lines and splotches expertly depict the kineticism of a wiggly dog in motion as Daisy bounds across the page and deeper into the woods. In a series of spot art and page turns, the background gets darker and darker, finally completely encircling Daisy in a shadowy double-page spread. The squirrel disappears up a tree, leaving Daisy alone and lost. An aerial view will help readers put the scene into perspective (her owner is not that far away), but for Daisy and her owner the tension is palpable. Sequential panels, full of color and movement, generate intense energy and emotion until finally a distraught Daisy howls. Once owner and pup reunite in an embrace, the background fades back to a reassuring creamy yellow, but readers can see on the final page that Daisy has not yet lost sight of that pesky squirrel. julie roach (c) Copyright 2014. The Horn Book, Inc., a wholly owned subsidiary of Media Source, Inc. No redistribution permitted.