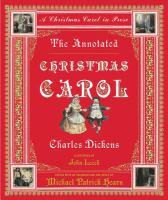 What would Christmas be without A Christmas Carol? Charles Dickens's famous ghost story is as much a part of the season as plum pudding and mistletoe, and Michael Patrick Hearn, the celebrated annotator of The Wizard of Oz and The Adventures of Huckleberry Finn, has now prepared a sumptuous new edition of the Dickens classic. This latest contribution to the Norton annotated series delves into the engrossing history of the book's publication, when it first captivated Victorian England. This is the first edition to combine the original text of 1843 with Dickens's Public Reading text, which had its world premiere in America in 1867 and has not been reprinted in nearly a century. Also included are rare photographs as well as the original Leech wood engravings and hand-colored etchings. These are supplemented by other contemporary illustrations by George Cruikshank, Gustave Dor? John Tenniel, and "Phiz." The Annotated Christmas Carol will be a literary feast for the whole family for generations.