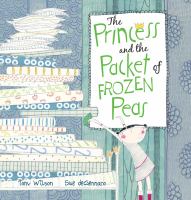 The princess and the packet of frozen peas /

In this modern take on the Princess and the Pea, Prince Henrik decides that sometimes real princesses can be too sensitive!<br> Prince Henrik wants to marry an outdoorsy kind of girl, so instead of a single pea tucked into a pile of bedding, Henrik tests prospective brides with an entire packet of frozen peas shoved under a flimsy camping mattress. Henrik despairs as princess after princess complains, until one day the just-right girl shows up unexpectedly in the form of his old friend, Pippa. Pippa is all too happy to join Henrik in pitching a tent or playing a hard game of hockey, after which she finds the perfect use for that packet of frozen peas!<br> In this remix of the fairy tale, Tony Wilson and Sue deGennaro deliver a freshly humorous take on one prince's search for the girl of his dreams.

Prince Henrik makes a plan to find a wife who is nothing like his royal brother's wife, who he thinks is too sensitive.

Prince Henrik doesn't want to marry a fussy girly-girl like his sister-in-law. His princess test involves a camping mat, a sleeping bag, and "a whole packet of frozen peas." When his hockey-playing friend Pippa has a good nights sleep, Henrik knows he's found his match. The collage, gouache, and pencil illustrations verge on unattractive, but they suit this playful fairy tale. (c) Copyright 2012. The Horn Book, Inc., a wholly owned subsidiary of Media Source, Inc. No redistribution permitted.