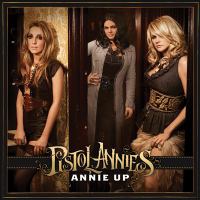 Why did Miranda Lambert choose to form a group at the height of her career? At first, it seemed she used Pistol Annies as a way to catapult kindred spirits Ashley Monroe and Angaleena Presley into the spotlight, but now that this objective has been achieved -- Monroe got loosened from the muck of the Music City, winding up delivering the terrific solo album Like a Rose early in 2013 -- there doesn't seem to be much reason for Lambert to stick with the trio. Far from leaving her comrades behind, Miranda doubled down with the Pistol Annies' second album Annie Up, a record that feels in every sense like a thoroughly integrated effort; the work of a group, not three individuals. All three share common bonds -- based on these songs, none of the Pistol Annies are content within their relationships, they're comfortable burying family secrets ("Hush Hush"), and are stubborn enough to live forever ("Unhappily Married") -- and the striking thing about Annie Up is how there is no clear separation between Lambert, Monroe, and Presley; they aren't just equals, but their stories meld into a singular narrative, three voices mining all the pain and pleasure of love and loss in the 21st century, as they trade verses, write from the same shared perspective, and tell tales nobody else dares to. Each of the Annies are savvy pros, cannily crafting songs that are simultaneously comforting and celebratory, conveying how quickly joy can turn into heartbreak, suggesting the same things that make us happy make us sad. Annie Up doesn't have the rhythm of a relationship, it has the relationship of life, the mess of family, new loves, and exes that hang around. In this context, the camaraderie of the Pistol Annies cuts deep -- they're a gang, encouraging the other two not to talk about Tina, praising sobriety, realizing life goes on even when love leaves -- and that gives Annie Up a bruised, beautiful richness. ~ Stephen Thomas Erlewine

American's sassy country trio Pistol Annies returns. The group is an composed of Miranda Lambert, Ashley Monroe, and Angaleena Presley. Annie's Up is the follow up to their 2011 debut album Hell on Heels.