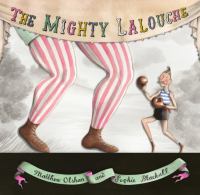 In Paris, France, there lived a humble postman named Lalouche. He was small, but his hands were nimble, his legs were fast, and his arms were strong. When his job was replaced by an electric car, he turned to boxing to support himself and his pet finch, Genevieve. But--"You? A boxer?" the fighters asked. "I could sneeze and knock you down!" Still, Lalouche refused to give up. And perhaps small Lalouche was just nimble . . . just fast . . . and just strong enough to beat his fierce competitors. This is a marvelous story, full of humor and heart, and illustrated by Sophie Blackall, winner of a New York Times Best Illustrated Award.

In Paris, France, more than a hundred years ago, a small man named Lalouche is let go from his job as a mail carrier and discovers that he has great skill as a fighter.

Small, bony Lalouche is a humble and solitary Parisian postman, contentedly delivering mail at the turn of the last century. His only companion in life is his pet finch, Genevieve. When he is made redundant by the technology of the electric autocar, he is desole (a glossary is appended). A poster catches his eye. "Are you nimble? Are you fast? Are you strong?" Lalouche is all three, and thus begins his career as a boxer. The Grecque, the Piston, Ampre, even the undefeated fight sensation the Anaconda -- Lalouche vanquishes them all. Plausible? An intriguing author's note informs us that "la boxe franaise favored speed and agility over brute strength." The stylishly funny text demands to be read aloud, to release our inner Francophones and for a chance to proclaim, "For country, mail, and Genevive!" We can almost hear the accordion in the background. The jaunty, kindly pictures in cut-paper collage cast lovely shadows, and the book design gives us ringside seats. sarah ellis (c) Copyright 2013. The Horn Book, Inc., a wholly owned subsidiary of Media Source, Inc. No redistribution permitted.