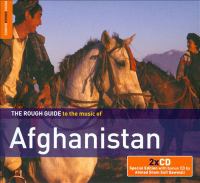 The rough guide to the music of Afghanistan [sound recording].

Afghanistan has barely been out of the news for years, it seems, and during the rule of the Taliban, from 1996-2001, music was banned. Since then it has vigorously returned, and this welcome addition to the Rough Guide series gives a strong indication of the variety of sounds available there, including some that predate many of the troubles. There are several examples of the national instrument, the plucked rubab, and more from the short-necked lute called the dambura. They're all vastly different and quite lovely, giving a sense of true variety. Equally informative are the female singers, like Naghma and Mahwash, a Sufi singer who's highly regarded in the country. Lest anyone believe that Afghanistan is mired in the past, there are several blasts from the present to liven things up, such as Setara Hussainzada, who won the Afghan version of American Idol. There's also another winner in Rafa Naabzada, whose offering is very generic. But the king of all is Farhad Darya, who's given two tracks, one straight rock recorded with German music (and sung partly in English), while the other is more rooted, but still definitely modern. Afghanistan still has many problems, but it's a place that's flourishing again musically -- and long may that last. ~ Chris Nickson

Program notes in English, French, and Spanish ([12] p.) in container.

Better known for conflict rather than music, this Rough Guide takes listeners way beyond the crossfire to explore the musical treasure house that is Afghanistan while revealing regional folk traditions, beautiful classical compositions, and a rising popular music scene.