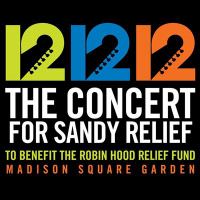 A charity album culled from a charity concert, 12/12/12: The Concert for Sandy Relief double-disc set doesn't sample from every act that played the star-studded Hurricane Sandy relief bill, nor does it have every noteworthy moment from that lengthy evening. For instance, "Cut Me Some Slack" -- the roaring, surprisingly enjoyable collaboration between Paul McCartney and the surviving members of Nirvana -- is nowhere to be found (it is being saved for the soundtrack of Dave Grohl's documentary Sound City), and there is nothing from Kanye West here, either. Instead, we have big doses from British classic rock royalty -- three songs apiece from Roger Waters and the Who, the entirety of the Rolling Stones' two-song set -- a pair of songs each from Bruce Springsteen, Alicia Keys, Eric Clapton, and Bon Jovi, three songs from Chris Martin, three songs from Billy Joel, and Adam Sandler's genuinely bizarre song parody of Leonard Cohen's "Hallelujah" (punchline: "Sandy screw'ya"). Although the Who seem slightly long in the tooth, there's not much here that's embarrassing; it's all professional stadium rock, delivered with precision if not panache. Here, as on the TV show, the ones that steal the show are Martin's surprise duet with Michael Stipe on "Losing My Religion," Clapton tearing into the Derek & the Dominos obscurity "Got to Get Better in a Little While," and Billy Joel performing his set with gusto, proving once again that he has a knack for rising to the occasion at these charity events. ~ Stephen Thomas Erlewine

Live recordings and highlights from the Madison Square Garden concert that took place on 12/12/12 in New York City to benefit victims of Hurricane Sandy.