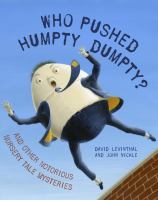 Who pushed Humpty Dumpty? : and other notorious nursery tale mysteries /

Break-in at the Three Bears family home? It could only be one dame. Wicked witch gone missing from her candied cottage? Hansel and Gretel claim it was self-defense. Did Humpty Dumpty really just fall off that wall, or was he pushed? Here are five fairy-tale stories with a twist, all told from the point of view of a streetwise police officer called Binky, who just happens to be a toad in a suit and a fedora. When Snow White doesn't make it to the beauty pageant, Officer Binky is the first to find the apple core lying by her bed. When an awful giant mysteriously crashes to the ground, upsetting the whole town, Binky discovers exactly who is responsible. Author David Levinthal and illustrator John Nickle retell these classic stories in the style of a 1940s noir detective novel--for kids!

Police detective Binky investigates the theft of a golden goose, the poisoning of Snow White, and other fairy tale crimes.

Once again folk tales and nursery rhymes prove their flexibility and resilience. The premise here (similar to that of Steve Metzger and Tedd Arnolds Detective Blue, rev. 9/11) is that the events of fairyland are crimes: "The Three Bears" is a breaking and entering; "Snow White" is an attempted murder; Hansel and Gretel present a self-defense plea. The detective on these cases is Binky, a laconic and rumpled frog cop, a warty Sam Spade. Levinthal has a good time with scene-of-the-crime details, forensics, and witness testimony, and the fun is contagious. The idea provides rich illustrative potential, and Nickles dramatic, hard-edged paintings, with their hint of grotesque misanthropy (reminiscent of Anthony Browne), are just the ticket, making especially effective use of varied page design and a low, froggy point of view. This is a world where big creatures loom, but Binky demonstrates the power of logic and a good deadpan one-liner. Of the pig who pushed Humpty Dumpty: "He was on his way to a different pen." sarah ellis (c) Copyright 2012. The Horn Book, Inc., a wholly owned subsidiary of Media Source, Inc. No redistribution permitted.