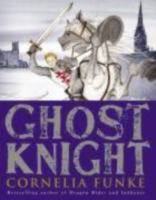 From international phenomenon Cornelia Funke, the bestselling author of Reckless and Inkheart.<br> <br> Eleven-year-old Jon Whitcroft never expected to enjoy boarding school. Then again, he never expected to be confronted by a pack of vengeful ghosts, either. And then he meets Ella, a quirky new friend with a taste for adventure...<br> <br> Together, Jon and Ella must work to uncover the secrets of a centuries-old murder while being haunted by terrifying spirits, their bloodless faces set on revenge. So when Jon summons the ghost of the late knight Longspee for his protection, there's just one question: Can Longspee truly be trusted?<br>

Eleven-year-old Jon Whitcroft and new friend Ella summon the ghost of Sir William Longspee, who may be able to protect Jon from a group of ghosts that threatens him harm from the day he arrives at Salisbury Cathedral's boarding school. Includes historical notes.

Jon Whitcroft, eleven, resents being sent away to boarding school; he thinks his mothers new boyfriend, whom Jon sneeringly refers to as "The Beard," is trying to get rid of him. Jon finds himself with bigger problems after being accosted by a terrifying band of ghosts with a centuries-old ax to grind against his family. Word of Jons encounter gets around school, and Ella, whose grandmother Zelda runs ghost tours and is rumored to be a witch, offers to help. The kids visit Salisbury Cathedral and call forth the soul of a knight, William Longspee (a historical person), sworn to "protect the innocent from the cruel, and the weak from the strong." Longspee comes to Jons aid, but secrets about the knights past call his trustworthiness into question. The plot thickens after The Beard -- revealed to be Ellas uncle -- shows up in Salisbury. Funkes consummate way with setting, well interpreted in Offermanns looming illustrations, brings the medieval English town (and all of its ghosts) to life, from the sprawling boarding school campus to the echoes-of-the-past cathedral and eerie cemetery grounds; a side jaunt to Stonehenge even adds some levity. Appended notes discuss Funkes inspiration for the story and provide history about the real-life people and places. elissa gershowitz (c) Copyright 2012. The Horn Book, Inc., a wholly owned subsidiary of Media Source, Inc. No redistribution permitted.