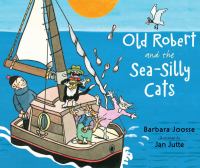 Old Robert and the sea-silly cats /

"The Cat and the Fiddle" for a new generation, by bestselling author Barbara Joosse<br> <br> Old Robert has everything he needs. Nothing more, nothing less. Each and every day, he sails the sea, alone. And each and every night, he docks his boat and prepares his dinner, alone. Until one evening when he gets a very strange visitor: a dancing cat. There's no room in Old Robert's shipshape boat for a cat. But much to his surprise, he finds himself smiling a bit, and inviting the cat in for dinner. The following night another cat arrives, this one juggling. And once again, Old Robert surprisingly finds himself inviting the cat in to his home. Before long, Old Robert has a boatful of cats, singing and dancing and juggling. He still has everything he needs, but now he has so much more.<br> <br> Barbara Joosse and Jan Jutte have teamed up again to deliver a story that will dance its way into readers' hearts.

Sailor Old Robert lives a solitary existence until some performing cats come into his life.

A cat tries making its way onto Old Robert's sailboat, but there's "no room in the trim little boat." When the sailor reluctantly lets the cat board, a string of other cats follow; he finds a place on his vessel--and in his life--for affection. There's not much to the repetitive story, but the text is rhythmic and Jutte's illustrations are playfully imaginative. (c) Copyright 2012. The Horn Book, Inc., a wholly owned subsidiary of Media Source, Inc. No redistribution permitted.