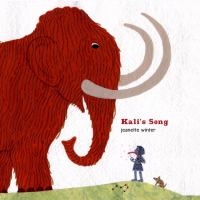 Renowned picture book author and illustrator Jeanette Winter brings us the enchanting story of a boy named Kali who lived thousands and thousands of years ago. Kali must learn to hunt, like the rest of the men in his tribe. But when Kali plucks the string on his bow, he forgets about shooting arrows, and makes music long into the night. Even the stars come close to listen.<br> <br> This lovely story celebrates the uniqueness in all of us, the beauty of the natural world, and the power of music and art over violence. According to the New York Times , it "will resonate with all young children who seek to find their path in the world--and may perhaps be a bit wary of other people's expectations."<br> <br> <br> From the Hardcover edition.

Thousands and thousands of years ago, a young boy gets his first hunting bow and learns to shoot, but he prefers to use the bow to make music.

When, "thousands and thousands and thousands of years ago," young Kali admires his mother's cave paintings, his father gives him a bow to practice for the hunt. Kali, however, sets aside his arrows and uses the bow for something new: putting it to his mouth, he plucks the string and creates music that stills the wild animals and draws them to him; even the stars "came close to listen." On the day of the hunt, Kali's song charms not only a herd of mammoths but his companions, who lay down their arrows and declare Kali a shaman. Indeed, when he grows up he's able to cure the sick and talk with "ancestor spirits." A hero tale rather than a realistic one, the story contains simple events that nicely dramatize how the arts and a wisdom transcending everyday necessity must always have been entwined. Winter's illustrations -- pen and ink and acrylic on rough-bordered handmade paper, in such natural colors as evergreen, stone gray, and the earthy brown of the mighty mammoths -- employ the flat, elemental forms of cave art, effectively animated by the character's actions and expressions. An interesting, and discussable, visit to the might-have-been. joanna rudge long (c) Copyright 2012. The Horn Book, Inc., a wholly owned subsidiary of Media Source, Inc. No redistribution permitted.