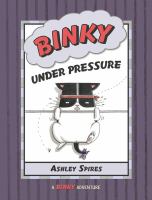 In Binky's third adventure, our intrepid, sometimes accident-prone hero is shaken out of his routine when he's forced to contend with Gracie, a dainty striped foster kitty who comes to live at Binky's space station (aka his home at 42 Sentinel Parkway). Binky instantly resents the new arrival, whose cute face and perfect manners are downright annoying. Indeed, Gracie seems too perfect. So Binky decides to do some undercover investigating and discovers a shocking truth about the family guest. Soon Binky is thrust full-throttle into a situation that puts all his Space Cat skills to the ultimate test!

Binky, a house cat that believes he is a space cat, is dismayed when Gracie, a too-perfect foster cat, comes to live at his space station, and decides to investigate to learn the truth about this unwelcome guest.