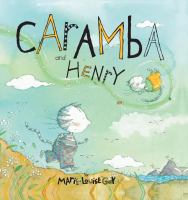 Caramba's little brother Henry is a nightmare. He won't share anything, he squishes Caramba's favorite caterpillars and he screams all the time. But the very worst thing about Henry is that he is learning how to fly -- much to Caramba's dismay -- because Caramba is the only cat in the world who can't fly.Now Caramba can't keep up with Henry, who gets into all sorts of trouble. He tries to protect his little brother, but that only makes Henry unhappy. Finally, Caramba ties a string around Henry's waist and lets him soar like a kite. But when Henry breaks free . . .Marie-Louise Gay's beloved Caramba is back in this funny, sweet story about siblings.

Caramba's troublesome little brother Henry learns to fly and breaks free from the string Caramba has tied around his waist, and it is dark when Caramba and his friend Portia finally find the little boy, clinging to a tree branch and very relieved to be rescued.

In this sequel to Caramba, the titular "only cat in the world who couldn't fly" is upset: his little brother runs him ragged and, worse, is learning how to fly (Caramba: "I thought he would be like me"). The path that leads to the siblings' final-page embrace is enchanting. Accompanying illustrations, in jubilant color combinations, exhibit Gay's light but sure touch. Copyright 2010 of The Horn Book, Inc. All rights reserved.