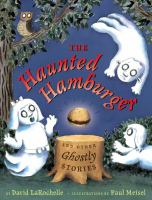 The haunted hamburger and other ghostly stories /

What's scarier than a ghost story? Three ghost stories, of course. And these three stories, told to little ghosts at bedtime, are the scariest kind of ghost stories there are-they're about people! From a ghost who becomes the victim of a baby in need of a diaper to a hamburger that can win a scaring contest just by lifting its bun, these hilariously illustrated silly stories are sure to bring Halloween laughs to even the littlest ghosts.

A ghost father tells his children three frightening stories to help them go to sleep at night.

Ghost siblings Franny and Frankie demand a story -- a scary story -- from Father Ghost before they'll go to sleep. Of course, one bedtime story is never enough, and Father Ghost is persuaded to tell three. In the first, Uncle Ned sets out to scare somebody but comes to a most ignominious end (hint: a baby's bottom is involved); in the second (a hilarious Tar Baby tale), Cousin Nell is cured of her constant boasting by an inert hamburger; and in the third and final story, two little misbehaving ghosts are scared straight by the horrible monster Big Bad Granny, who subdues with hugs, tickles, and kisses ("Don't do it! Don't do it!"). Each story is entertaining on its own, but when the third one leaches through into the frame to form part of Father Ghost's bedtime strategy (he's not quite the patsy his children take him for), the book unifies into a truly satisfying whole. The humor is freewheeling and perfectly calibrated -- diapers! lipsticky smooches! yuck! -- for its audience; it should evoke both sniggers and belly laughs. Meisel channels Roz Chwast and Victoria Chess to lend his illustrations an exaggerated tongue-in-cheek goofiness. Perfect for Halloween -- but too good not to read all year round. martha v. parravano (c) Copyright 2011. The Horn Book, Inc., a wholly owned subsidiary of Media Source, Inc. No redistribution permitted.