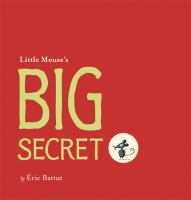 Shh...! Little Mouse has a secret! He's found a delicious-looking apple and doesn't want to share a bite. So he buries it, and no matter how many of his friends ask what he hid, Little Mouse won't tell.  But when a tree sprouts from the seeds of the fruit, there are enough apples for everyone-and Little Mouse realizes some secrets are even better when they're shared.<br>   Award-winning illustrator #65533;ric Battut has created a charming picture book that will delight-and teach-children.

Little Mouse refuses to reveal his secret despite being questioned by his friends.

Mouse finds an apple, which he quickly buries and keeps secret from the other animals. However, a tree begins to sprout; it grows, flowers, and drops fruit for everyone to enjoy. The secret is revealed: "But sometimes...secrets are even better when you share them." Spare, uncluttered illustrations of tiny animals alongside the growing tree complement this brief, satisfying fable. (c) Copyright 2011. The Horn Book, Inc., a wholly owned subsidiary of Media Source, Inc. No redistribution permitted.