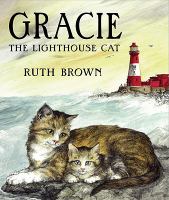 The dual stories--one told only in pictures, the other in both pictures and text--illustrate the bravery of two rescues in 1838, which saved thirteen people from a shipwreck and one poor kitten from a terrible storm.

When Gracie discovers that her kitten is missing from their lighthouse home, she goes out into a terrible storm to rescue him.

A mother cat who lives in a lighthouse saves her kitten from a terrible storm. In the illustrations behind this simple, satisfying story, an even more dramatic one unfolds: the famous 1838 rescue of thirteen shipwrecked passengers by heroic young Grace Darling. Expressive watercolors capture the ferocity of the storm as well as the coziness inside the lighthouse in both rescues' aftermath. (c) Copyright 2011. The Horn Book, Inc., a wholly owned subsidiary of Media Source, Inc. No redistribution permitted.