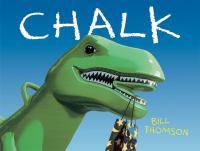 A wordless picture book about three children who go to a park on a rainy day, find some chalk, and draw pictures that come to life.

One rainy day, three kids find a bag of colored chalk at a park and discover that whatever they draw (e.g., a yellow sun) becomes real (the rain suddenly stops). Like Raymond Briggs's The Snowman, this wordless book will have readers happily suspending disbelief. The photorealistic art, which offers close-ups as well as skewed aerial perspectives, is dazzling. Copyright 2010 of The Horn Book, Inc. All rights reserved.