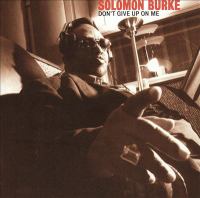 Don't give up on me [sound recording] /

It's a sad irony that in the 1980s and '90s, many of the great artists of soul and R&B suffered musically at the hands of those who professed to love them the most. After soul had dropped off the major-label radar in favor of hip-hop and new jack sounds, a number of smaller companies stepped forward to record veteran artists who were still giving their all on the road, but for every truly inspired release from labels such as Malaco, Bullseye, or Alligator, there were a dozen others which featured rote, generic production and arrangements which attempted to recapture the thrilling sound of soul's glory days without coming within driving distance of conjuring their ineffable magic. Solomon Burke was one of the greatest talents of '60s soul, whose strong, burnished voice resonated with a churchy fervor that could speak volumes about either triumph or hurt, but while he continued to record regularly through the '70s, '80s and '90s and always sounded splendid, the records themselves often weren't much to write home about, with Burke using his gifts to prop up second-rate material or re-record tunes he'd performed definitively in the past. So it's good news indeed to report that Burke's new album, Don't Give Up on Me, is nothing short of revelatory, a superb set which presents "the King of Rock and Soul" at the very top of his form. Singer and songwriter Joe Henry produced the set, and rather than trying to replicate the sound of a vintage Jerry Wexler session, he's taken a very different approach, going for a spare and open sound, with nothing but a subdued rhythm section, a guitar, and an organ (the latter played by Rudy Copeland, who performs the same honors at the church where Burke preaches) accompanying Burke on most of these 11 songs. Henry also put out a call for material worthy of Burke's gifts, and a number of his better-known fans responded, including Bob Dylan, Tom Waits, Van Morrison, Elvis Costello, Brian Wilson, and Nick Lowe, all of whom contributed songs to the project. But for all the songwriting starpower on deck, the focus is squarely on Solomon Burke throughout, and he proves he's lost none of the power, force, or dramatic intensity of his glory days. Henry's low-key production captures the nooks and crannies of Burke's voice, and he delivers a performance worthy of a great actor on each cut, from the deep soul of "Don't Give Up on Me" and the blues-based swagger of "Stepchild" to the inspired tall tales of "Diamond in Your Mind" and the near-operatic passion of "The Judgement." His voice is in superb shape, too, sounding no less powerful at age 66 than he did in his glory days, and with a depth of emotion and gift for phrasing that's only grown with the passage of time. In many ways, Don't Give Up on Me most closely resembles Johnny Cash's superb American Recordings, in that the spare simplicity of the album's presentation reveals the rich complexities of the singer's gifts as they've rarely been allowed in the past; while it's a very different kettle of fish from his classic sides for Atlantic in the 1960s, Don't Give up on Me leaves no doubt that Solomon Burke is still one of the finest voices of his time, and anyone who has ever been moved by the power of soul music needs to hear this album. ~ Mark Deming