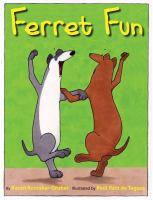 <p>Fudge and Einstein are ferrets. Marvel is a cat. Two ferrets plus one cat equal trouble. But Fudge and Einstein are smart. They know just how to teach a hungry cat that ferrets are more fun to play with than to eat. Paul Rátz de Tagyos' illustrations, rendered in marker and ink, bring this ferret fiasco to a fitting conclusion.</p>

Two nervous pet ferrets named Fudge and Einstein try to convince a visiting cat that they are not mouth-watering rats.

House-pet ferrets Fudge and Einstein nervously welcome visiting cat, Marvel, into their home. When Marvel mistakes them for rats ("I love tasty...rats"), the two must show her who's boss in order to save their necks. Fudge and Einstein's humorous exchanges with each other and with Marvel will entertain readers. Clean-lined marker and ink cartoon-panel illustrations add to the liveliness. (c) Copyright 2011. The Horn Book, Inc., a wholly owned subsidiary of Media Source, Inc. No redistribution permitted.