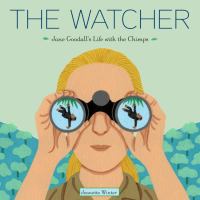 The watcher : Jane Goodall's life with the chimps /

Acclaimed picture book biographer Jeanette Winter has found her perfect subject: Jane Goodall, the great observer of chimpanzees. Follow Jane from her childhood in London watching a robin on her windowsill, to her years in the African forests of Gombe, Tanzania, invited by brilliant scientist Louis Leakey to observe chimps, to her worldwide crusade to save these primates who are now in danger of extinction, and their habitat. Young animal lovers and Winter's many fans will welcome this fascinating and moving portrait of an extraordinary person and the animals to whom she has dedicated her life.<br> <br> The Watcher was named a Best Book of the Year by the Boston Globe , Kirkus Reviews , Booklist , and the Bank Street College of Education.

An illustrated biography of British primatologist Jane Goodall, describing her childhood, the years she spent in the African forests to observe chimpanzees, and her efforts to protect and preserve primates and their habitats.

This tranquil picture-book biography establishes from the beginning that Jane Goodall has always had the right temperament for the work that made her famous. A marvelous opening scene shows her at age five, sitting patiently in a henhouse, not emerging until able to announce to the frantic relatives searching for her that "I know how an egg comes out!" The theme of persistence, particularly in relation to observing animals, shapes the spare, inviting text, which takes Goodall from backyard observations to scientific study of chimpanzees in Tanzania. In Winter's signature stylized paintings, the jungle is rendered in cool blues and greens, and the pictures of Goodall's earliest days there offer the viewer playful games of hide-and-seek. One panorama has Jane sitting on a peak with binoculars while down below, unseen by her, chimps peep from the brush. The book does perpetuate the misconception that Goodall was alone during much of her field research (when in fact, from the outset, locals transported her gear and helped her find the best spots for viewing the animals). Yet overall it gives an accurate, visually appealing account of her discoveries -- that chimps eat meat, use tools, etc. -- and of her transition from watching chimpanzees to campaigning tirelessly to save them. Back matter not seen. christine m. heppermann (c) Copyright 2011. The Horn Book, Inc., a wholly owned subsidiary of Media Source, Inc. No redistribution permitted.