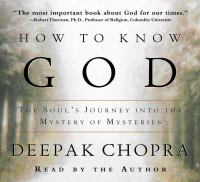 How to know God [sound recording] : [the soul's journey into the mystery of mysteries] /

Read by the author<br> Three CDs / approx. 5 hours<br> <br> The bestselling author Deepak Chopra is back with a new work that explores the seven ways we experience God.  As Chopra explains, these experiences are shaped not by any one religion but by an instinct that is hard-wired into the brain.  In this remarkable work, Chopra takes us step by step, from the first stage, where the brain's "fight or flight" response yields us the experience of a God who is an all-powerful parent, to the seventh stage, where the brain experiences God as pure being, a sacred presence that just is.  All seven stages are available to us at all times.<br> <br> In How to Know God , Chopra charts a fascinating course for us, as we explore mysticism, religious ecstasy, genius, telepathy, multiple personality, and clairvoyance, drawing insights from psychology, neurology and physics as well as from the great religions.

Chopra, best-selling author of Ageless Body, Timeless Mind and The Seven Spiritual Laws of Success and the CEO and founder of the Chopra Center for Well-Being in La Jolla, CA, continues his exploration of science and philosophy. According to him, the brain is "hardwired to know God." He reminds the listener that the human nervous system has seven biological responses that correspond to the seven levels of divine experience. The brain has an infinite need to make meaning from what Chopra calls "quantum soup." This work delves into the mysteries of religious awakening and offers an accessible guide for the spiritual seeker. The book, while abridged, is still a long listen at five hours. Larger public libraries will probably need at least one copy due to the author's popularity. Smaller public libraries should purchase as the need arises.ÄPam Kingsbury, Florence, AL (c) Copyright 2010. Library Journals LLC, a wholly owned subsidiary of Media Source, Inc. No redistribution permitted.