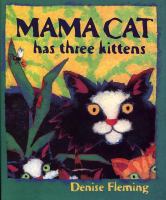 <p>Some kittens march to the beat of a different drummer.</p> <p> Mama Cat has three kittens, Fluffy, Skinny, and Boris. Where Mama Cat leads, Fluffy and Skinny follow. But what about Boris-- will he ever stop napping and join the fun? </p> <p>Young children will love Mama Cat and her three kittens. They'll also enjoy looking for three other creatures hidden in every scene. But they'll have to count carefully -- Mama Mouse has a surprise.</p> <p>Using her own cats as models, Denise Fleming has captured the moods, expressions, and antics of a mother cat and her kittens. But there is a rebel in every crowd, and Boris is sure to charm readers who will recognize themselves in his contrary ways.</p>

While two kittens copy everything their mother does, their brother naps.

Fleming's distinctive paper-pulp artwork illustrates a repetitive story in which Fluffy and Skinny imitate Mama, while Boris naps. Young children will enjoy the bright, colorful pictures of frolicking kittens and take pleasure in spotting the mouse that scampers through the pages with an agenda of its own. From HORN BOOK Spring 1999, (c) Copyright 2010. The Horn Book, Inc., a wholly owned subsidiary of Media Source, Inc. No redistribution permitted.