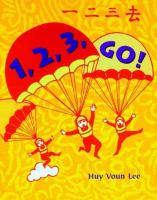 A colorful, playful counting book that introduces young children to Chinese characters and action words. <br> <br> One little girl catches a butterfly. Two small swimmers stomp in puddles. Three young musicians bang their drums. The children in this action-packed counting book jump, dance, and run through the numbers from one to ten. 1, 2, 3, Go! is an exciting introduction to the simplest and most logical of the beautiful picture-words that are used in written Chinese.<br> <br> Bright colors and bold shapes make the logic behind the picture-words clear. Readers learn that the characters for words such as "push" and "carry," which are actions that involve the use of hands, include the basic character for "hand." And the picture words for actions done with the feet, such as kicking and dancing, all include the basic character for "foot."<br> <br> In her delicate cut-paper artwork Huy Voun Lee, the author and illustrator of three other highly-acclaimed books on Chinese character writing, has captured all the joy and energy of children at play.<br>

An introduction to Chinese writing describing the construction, meaning, and pronunciation of simple characters used for a variety of words and the numbers one through ten.

Text in English and Chinese.

Children at play are shown in elegant cut-paper collage, while a simple text counts from one to ten: Five carry. / Six pull. / Seven tiptoe. Included are Chinese characters for the number and the verb; the verbs contain either the hand or foot symbol as part of the character. Not an introduction to the language, the book is instead a brief look at the inherent logic within Chinese characters. From HORN BOOK Fall 2001, (c) Copyright 2010. The Horn Book, Inc., a wholly owned subsidiary of Media Source, Inc. No redistribution permitted.