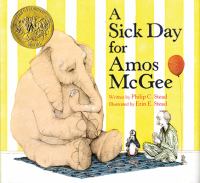 A sick day for Amos McGee /

<p>THE BEST SICK DAY EVER and the animals in the zoo feature in this striking picture book debut.</p> <p>Friends come in all sorts of shapes and sizes. In Amos McGee's case, all sorts of species, too! Every day he spends a little bit of time with each of his friends at the zoo, running races with the tortoise, keeping the shy penguin company, and even reading bedtime stories to the owl. But when Amos is too sick to make it to the zoo, his animal friends decide it's time they returned the favor.</p> <p> A Sick Day for Amos McGee by Philip C. Stead and Erin E. Stead is a 2011 Bank Street - Best Children's Book of the Year and the winner of the 2011 Caldecott Medal. This title has Common Core connections.</p>

Zookeeper Amos McGee, who is adored by all the animals, gets some unexpected guests while home sick one day.

Kindly zookeeper Amos McGee is a creature of habit, much like his animal charges. Every day Amos follows the same morning routine; and when he gets to work, he "always [makes] time to visit his good friends." Amos has a special relationship with each one of his pals: he plays chess with the thoughtful elephant, races the tortoise "who never ever lost," quietly keeps the shy penguin company, has a handkerchief ready for the runny-nosed rhino, and reads stories to the owl "who was afraid of the dark." Erin Stead's attentively detailed pencil and woodblock illustrations reveal character and enhance the cozy mood of Philip Stead's gentle text. Wiry, elderly Amos has a kindly Mister Rogers air about him; the animals, while realistically rendered overall, display distinct personalities without uttering a word. When Amos stays home one day to nurse a cold, his friends have just the right medicine: they make time to visit their good friend. Two wordless spreads showing the animals (and one peripatetic red balloon) taking the bus to Amos's house have an almost surreal quality, which adds some low-key anticipation to the understated story. From HORN BOOK, (c) Copyright 2010. The Horn Book, Inc., a wholly owned subsidiary of Media Source, Inc. No redistribution permitted.