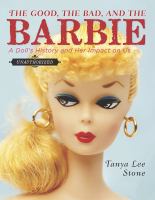 The good, the bad, and the Barbie : a doll's history and her impact on us /

During her unparalleled fifty-year history, Barbie has been the doll that some people love-and some people love to hate. There's no question she's influenced generations, but to what end? Acclaimed nonfiction author Tanya Lee Stone takes an unbiased look at how Barbie became the icon that she is, and at the impact that she's had on our culture (and vice versa). Featuring passionate anecdotes and memories from a range of girls and women, a foreword by Meg Cabot, and original color photographs, this book explores the Barbie phenomenon in a brand-new light.

Explores how Barbie has influenced generations of girls, discussing criticisms of the doll, her role in fashion, and her surprising popularity during her first fifty years.

Is Barbie a blond Chucky slashing away at little girls' self-esteem? Or is she My First Feminist, with her lab coats, astronaut helmets, and high-fashion gowns, encouraging girls to imagine themselves in whatever roles they choose? Stone's evenhanded, eye-opening cultural history examines this split personality, quoting a myriad of sources to reveal the devotion and loathing generated by a fifty-plus-year-old hunk of molded plastic. Barbie debuted in 1959, after her creator Ruth Handler, a co-founder of Mattel, noticed her daughter Barbara eschewing baby dolls in favor of adult paper dolls. Stone reports Ruth as having said, "I used to watch [Barbara playing] over and over and think: if only we could take this play pattern and three-dimensionalize it, we would have something very special." With help from black-and-white and color photos, Stone fleshes out the different meanings of "very special" -- from the persistent outcry over Barbie's impossibly "perfect" dimensions to the ways, some more successful than others, that Mattel has updated her over the years, attempting to make her more "real" (through skin tone and wardrobes). A particularly enjoyable chapter details the creative, often downright abusive play -- "We used her as swords for duels. But the best was Marie Antoinette Barbie. On a scaffold built of encyclopedias, we whacked off her head but good" -- girls have subjected Barbie to over the years. No wonder she's so popular: she's pretty, she has great clothes, and she's ours to adore or torture at will. Appended are an author's note, source notes, a bibliography, and an (unseen) index. christine m. heppermann (c) Copyright 2010. The Horn Book, Inc., a wholly owned subsidiary of Media Source, Inc. No redistribution permitted.