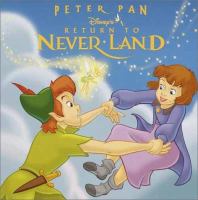 The legend of Peter Pan continues with Return to Never Land, an animated sequel coming to the big screen in February 2002. Join Peter Pan, Captain Hook, and Tinker Bell in this beautifully illustrated Pictureback retelling of the film.

At head of title: Peter Pan.

The legend of Peter Pan, Captain Hook, and Tinker Bell continues in this tie-in to the new Walt Disney animated sequel due in theaters in February of 2002.