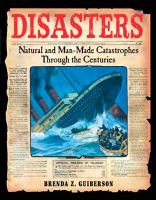 Disasters : natural and man-made catastrophes through the centuries /

<p>Natural and man-made disasters have the power to destroy thousands of lives very quickly. Both as they unfold and in the aftermath, these forces of nature astonish the rest of the world with their incredible devastation and magnitude. In this collection of ten well-known catastrophes such as the great Chicago fire, the sinking of the Titanic, and hurricane Katrina, Brenda Guiberson explores the causes and effects, as well as the local and global reverberations of these calamitous events. Highlighted with photographs and drawings, each compelling account tells the story of destruction and devastation, and most especially, the power of mankind to persevere in the face of adversity.</p>

Provides details of ten catastrophic events in history and their causes and effects, including the Great Chicago Fire, the sinking of the Titanic, and Hurricane Katrina.

Ten chapters that read like well-documented magazine articles cover a series of disasters, beginning chronologically with smallpox and concluding with Hurricane Katrina. Each opens by providing brief historical context (such as sweatshop conditions in the Triangle Shirtwaist Factory) and concludes with lasting consequences initiated by the disaster (the iceberg patrols in the North Atlantic, for example, after the sinking of the Titanic). Archival photographs vary in effectiveness. A farm buried in dust in the 1930s and a picture of the mold in New Orleans homes after Katrina are dramatic and informative. The illustration of elephants as a way to identify the animals in the chapter on the 2004 tsunami, or the chart displaying poultry around the world in the chapter on the 1918 flu pandemic, however, serve merely as filler. Even though several of these disasters appear to be the work of nature, the careless hand of humankind is also evident: the disappearance of the Louisiana wetlands, shoddy building in San Francisco at the turn of the century, and the faulty dam constructed by the South Fork Fishing and Hunting Club that could not contain the water of the Johnstown flood. Chapter notes include sources for additional information as well as documentation. An index (unseen) concludes the book. From HORN BOOK, (c) Copyright 2010. The Horn Book, Inc., a wholly owned subsidiary of Media Source, Inc. No redistribution permitted.