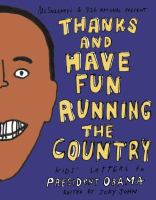 Thanks and have fun running the country : kids' letters to President Obama /

<p>A few days after the election of Barack Obama, kids around the country were asked to provide advice and guidance to their new president. In this collection, there's loads advice for the president, often hilarious, sometimes heartfelt, and occasionally downright practical. Students from all over the country reach out to the 44th president, speaking to the issues closest to their hearts, relating their life stories, and asking for help. Topics include the economy, education, war, global warming, race relations in America and immigration. The book also includes letters about snow cones, puppies, microwavable burritos, dinosaur projects, multiplication and the ghost of Abraham Lincoln, reportedly haunting a White House bedroom.<br> <br> Proceeds benefit 826 National, a network of nonprofit writing and tutoring centers around the country.</p>