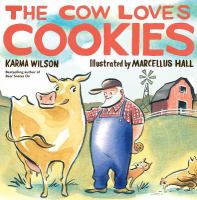 The horse loves hay, the chickens need feed, the geese munch on corn, the hogs devour slop, the dog eats treats, but the cow loves...COOKIES? Don't miss this barnyard treat, featuring a new cover, from the author of the New York Times bestselling Bear series.<br> <br> With an original twist on the ordinary barnyard picture book, this read-aloud from bestselling author Karma Wilson is a clever exploration of a curious incident on the farm. As the farmer makes his rounds each day, most of the animals chew on the foods a young reader would expect. But when it's time to feed the cow, she feasts on a special treat! Wilson's signature style and Marcellus Hall's spirited watercolors will delight children on and off the farm--because when it comes down to it, who doesn't love milk and cookies?

While all the other animals on the farm enjoy eating their regular food, the cow chooses to eat the one thing that she loves best.

A farmer's horses love hay, his geese gobble corn, and his dog wags its tail, but his cow only eats cookies. Thick black ink outlines the subdued watercolors showing a jolly farmer caring for his menagerie. While the rhyming text is accessible, some of its placement is odd. Also, the story's denouement--farmer and cow dunking cookies in fresh-squeezed milk--is a tad bizarre. Copyright 2010 of The Horn Book, Inc. All rights reserved.