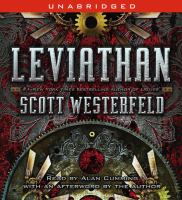 It is the cusp of World War I, and all the European powers are arming up. The Austro-Hungarians and Germans have their Clankers, steam-driven iron machines loaded with guns and ammunition. The British Darwinists employ fabricated animals as their weaponry. The Leviathan is a living airship, the most formidable airbeast in the skies of Europe.<br> <br> Aleksandar Ferdinand, prince of the Austro-Hungarian Empire, is on the run. His own people have turned on him. His title is worthless. All he has is a battle-torn Stormwalker and a loyal crew of men.<br> <br> Deryn Sharp is a commoner, a girl disguised as a boy in the British Air Service. She's a brilliant airman. But her secret is in constant danger of being discovered.<br> <br> With the Great War brewing, Alek's and Deryn's paths cross in the most unexpected wayÉtaking them both aboard the Leviathan on a fantastical, around-the-world adventure. One that will change both their lives forever.

Unabridged audio version of the book.

In an alternate 1914 Europe, fifteen-year-old Austrian Prince Alek, on the run from the Clanker Powers who are attempting to take over the globe using mechanical machinery, forms an uneasy alliance with Deryn who, disguised as a boy to join the British Air Service, is learning to fly genetically-engineered beasts.

(Middle School, High School) The ever-popular Westerfeld opens his newest series with a mix of alternative history and steampunk (a science fiction subgenre that fuses futuristic and antiquated elements). As World War I breaks out, Prince Aleksandar and his advisers escape the enemies of his father, the assassinated Archduke, and flee to a remote estate in the Swiss Alps. Meanwhile, Deryn Sharp, a girl disguised as a boy, is on board the British airship Leviathan, which eventually crashes near Alek's estate. To this point the plot feels leaden and the characters seem one-dimensional, but as the two sides -- the German Clankers and their traditional mechanical technology on the one hand and the English Darwinists with their contrasting biotechnology on the other -- meet and begin the complicated dance of diplomacy, the story and the characters come to life. A hasty, collaborative effort raises the Leviathan, and our protagonists escape to the Ottoman Empire -- and the second installment. Though the book shows promise, it's too early to tell how the series will compare with the work of Philip Reeve (in the Hungry City Chronicles) and Kenneth Oppel (in Airborn and sequels), which currently set the gold standard for steampunk in the young adult field. From HORN BOOK, (c) Copyright 2010. The Horn Book, Inc., a wholly owned subsidiary of Media Source, Inc. No redistribution permitted.