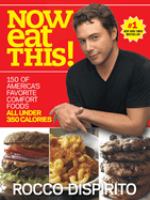 A popular chef takes 150 familiar recipes and puts a healthy spin on them, all without sacrificing the well-loved flavors of these classic American dishes.

Celebrity chef DiSpirito (Rocco Gets Real), a frequent guest judge on The Biggest Loser and Top Chef, shares "Can't-Live-Without Ingredients" from cauliflower (an excellent replacement for white potatoes), Dijon mustard, and egg whites to fresh herbs, garlic, and Greek yogurt (instead of butter). Each recipe lists fat and calories compared with the average fat and calories for the traditional dish. Lower-calorie brownies, gravy, spaghetti and meatballs, and beef stroganoff will delight readers who have been avoiding favorite foods. DiSpirito does well what Marlene Koch's Eat What You Love attempts, and his name will draw interest. (c) Copyright 2010. Library Journals LLC, a wholly owned subsidiary of Media Source, Inc. No redistribution permitted.