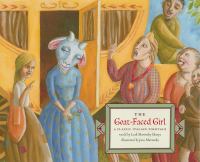 Like many good fables, this story opens with a child left in the woods. A large lizard picks up the infant and takes her home, where she soon grows into a pretty, pampered, and generally useless young woman named Isabella. Despite her adoptive mother's efforts (for the lizard is really a witch in disguise) to shape her up, the girl prefers the alluring life offered her by the charming Prince Rupert, a world of cooks and servants, palaces and jewels, luxury and indolence. Luckily, the witch is a canny, concerned parent. She does not suffer fools lightly and is not about to let her daughter's too-easy transition to palace life go unchallenged. And so she arranges a surprise transformation for her daughter one that puts the prince's marital plans on hold and gives the witch just enough time to hammer home a few lessons about the downside of idleness.

When Isabella, a beautiful but lazy young woman, agrees to marry an equally lazy prince, the sorceress who raised her gives her the head of a goat in hopes that she will learn to do things for herself.