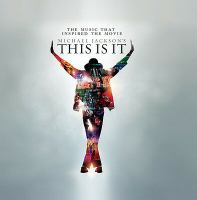 Michael Jackson's This is it [sound recording] : the music that inspired the movie.

An important thing to remember when considering the soundtrack to This Is It: this entire film and CD project was never supposed to happen. This Is It was designed as a comeback tour, not a movie, with the rehearsals taped not for exhibition, but rather instruction, possibly some video bonus down the line. Of course, Michael Jackson's tragic passing created considerable demand for those final rehearsals (no need to get into the financial need, as well), so they were packaged as the This Is It film, released almost five months after his death, with a soundtrack as an accompaniment. Since there were no real live recordings made, at least not any to fill a big-budget blockbuster like this, the soundtrack consists of almost nothing but the hits repackaged one more time, with the title track -- an '80s leftover, co-written by Paul Anka and released under the name "I Never Heard" by Safire -- added as an enticement in two separate versions, the second being orchestral with an opening straight out of Sgt. Pepper's. The song does feel like a demo, right down to how it fades out mid-chorus, but there's no denying the thrill of hearing an unheard vocal track of Michael at his prime, no matter how mediocre the song may be. Whether this makes this worth purchasing is another question entirely. There's a second disc containing demos of "She's Out of My Life" (just Michael and an acoustic, quite nice) "Wanna Be Startin' Somethin'" (full demo, with identical rhythm and guitar lines, close to the final version but lacking its horns), and "Beat It" (a true writer's sketch, all vocals and harmonies, no lyrics or instruments, kind of awesome) plus a "poem" of "Planet Earth." ~ Stephen Thomas Erlewine