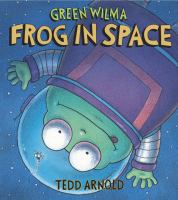 <p>Green Wilma is so determined to catch a tasty fly that she doesn't notice a family of galactic visitors to her pond. In a case of mistaken identity, the alien parents beam Wilma on board their spaceship while leaving their child, Blooger, behind. Poor Blooger, stuck on the bewildering planet Earth. Poor Wilma, hungry and confused (though also having the ride of her life!). Will the two be able to switch back in time for supper?</p> <p>It's a warp-speed comedy sure to please the fans of Tedd Arnold's Geisel Honor - winning Hi! Fly Guy , his beloved Parts books, and especially Green Wilma , which was an IRA-CBC Children's Choice book and a PBS Storytime featured selection.</p> <br>

Green Wilma the frog is mistaken for an alien child and taken on a trip through space.

Wilma, a frog, is mistakenly taken aboard an alien spaceship. All is set right when Wilma's instinctual fly-chasing antics cause some crazy spaceship maneuvering, taking them back to Earth where frog is swapped for the missing alien child. This rhyming cosmic outing is given a boost by comic illustrations. (c) Copyright 2010. The Horn Book, Inc., a wholly owned subsidiary of Media Source, Inc. No redistribution permitted. All rights reserved.