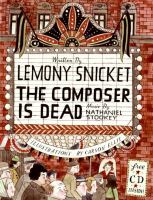 The composer is dead /

<p>There's dreadful news from the symphony hall--the composer is dead!</p> <p>If you have ever heard an orchestra play, then you know that musicians are most certainly guilty of something. Where exactly were the violins on the night in question? Did anyone see the harp? Is the trumpet protesting a bit too boisterously?</p> <p>In this perplexing murder mystery, everyone seems to have a motive, everyone has an alibi, and nearly everyone is a musical instrument. But the composer is still dead.</p> <p>Perhaps you can solve the crime yourself. Join the Inspector as he interrogates all the unusual suspects. Then listen to the accompanying audio recording featuring Lemony Snicket and the music of Nathaniel Stookey performed by the San Francisco Symphony. Hear for yourself exactly what took place on that fateful, well-orchestrated evening.</p>

Performed by the San Francisco Symphony.

An inpector seeks to solve a murder mystery at the symphony by questioning each of the musical instruments.

Snicket's musical mystery begins with a murder. A comically overzealous inspector then interrogates each section of the orchestra. Puns and wordplay figure heavily while information about the instruments is imparted. Delicate line illustrations with lots of white space help readers navigate the tale's deliberate cacophony. A CD of the story read by Snicket, accompanied by the San Francisco Symphony, is included. (c) Copyright 2010. The Horn Book, Inc., a wholly owned subsidiary of Media Source, Inc. No redistribution permitted. All rights reserved.