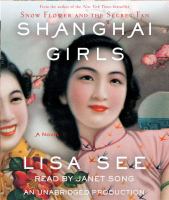 In 1937, Shanghai is the Paris of Asia, a city of great wealth and glamour, the home of millionaires and beggars, gangsters and gamblers, patriots and revolutionaries, artists and warlords. Thanks to the financial security and material comforts provided by their father s prosperous rickshaw business, twenty-one-year-old Pearl Chin and her younger sister, May, are having the time of their lives. Though both sisters wave off authority and tradition, they couldn t be more different: Pearl is a Dragon sign, strong and stubborn, while May is a true Sheep, adorable and placid. Both are beautiful, modern, and carefree . . . until the day their father tells them that he has gambled away their wealth and that in order to repay his debts he must sell the girls as wives to suitors who have traveled from California to find Chinese brides. <br>As Japanese bombs fall on their beloved city, Pearl and May set out on the journey of a lifetime, one that will take them through the Chinese countryside, in and out of the clutch of brutal soldiers, and across the Pacific to the shores of America. In Los Angeles they begin a fresh chapter, trying to find love with the strangers they have married, brushing against the seduction of Hollywood, and striving to embrace American life even as they fight against discrimination, brave Communist witch hunts, and find themselves hemmed in by Chinatown s old ways and rules. <br>At its heart, Shanghai Girls is a story of sisters: Pearl and May are inseparable best friends who share hopes, dreams, and a deep connection, but like sisters everywhere they also harbor petty jealousies and rivalries. They love each other, but each knows exactly where to drive the knife to hurt the other the most. Along the way they face terrible sacrifices, make impossible choices, and confront a devastating, life-changing secret, but through it all the two heroines of this astounding new novel hold fast to who they are Shanghai girls. <p> From the Hardcover edition. "

Sisters May and Pearl leave their 1930s Shanghai home for a better life in America. They have been arranged to be married to two L.A. businessmen, and uncertainty regins. Arriving at Angel's Island (the Western Ellis Island), they are soon introduced to the harsh realities of immigrant life.

<opt> <anon I1="BLANK" I2="BLANK">Chapter One Beautiful Girls "our daughter looks like a South China peasant with those red cheeks," my father complains, pointedly ignoring the soup before him. "Can't you do something about them?" Mama stares at Baba, but what can she say? My face is pretty enough- some might even say lovely-but not as luminescent as the pearl I'm named for. I tend to blush easily. Beyond that, my cheeks capture the sun. When I turned five, my mother began rubbing my face and arms with pearl creams, and mixing ground pearls into my morning jook-rice porridge-hoping the white essence would permeate my skin. It hasn't worked. Now my cheeks burn red-exactly what my father hates. I shrink down into my chair. I always slump when I'm near him, but I slump even more on those occasions when Baba takes his eyes off my sister to look at me. I'm taller than my father, which he loathes. We live in Shanghai, where the tallest car, the tallest wall, or the tallest building sends a clear and unwavering message that the owner is a person of great importance. I am not a person of importance. "She thinks she's smart," Baba goes on. He wears a Western-style suit of good cut. His hair shows just a few strands of gray. He's been anxious lately, but tonight his mood is darker than usual. Perhaps his favorite horse didn't win or the dice refused to land his way. "But one thing she isn't is clever." This is another of my father's standard criticisms and one he picked up from Confucius, who wrote, "An educated woman is a worthless woman." People call me bookish, which even in 1937 is not considered a good thing. But as smart as I am, I don't know how to protect myself from my father's words. Most families eat at a round dining table, so they will always be whole and connected, with no sharp edges. We have a square teakwood table, and we always sit in the exact same places: my father next to May on one side of the table, with my mother directly across from her so that my parents can share my sister equally. Every meal-day after day, year after year-is a reminder that I'm not the favorite and never will be. As my father continues to pick at my faults, I shut him out and pretend an interest in our dining room. On the wall adjoining the kitchen, four scrolls depicting the four seasons usually hang. Tonight they've been removed, leaving shadow outlines on the wall. They aren't the only things missing. We used to have an overhead fan, but this past year Baba thought it would be more luxurious to have servants fan us while we ate. They aren't here tonight and the room is sweltering. Ordinarily an art deco chandelier and matching wall sconces of etched yellow-and-rose-tinted glass illuminate the room. These are missing as well. I don't give any of this much thought, assuming that the scrolls have been put away to prevent their silken edges from curling in the humidity, that Baba has given the servants a night off to celebrate a wedding or birthday with their own families, and that the lighting fixtures have been temporarily taken down for cleaning. Cook-who has no wife and children of his own-removes our soup bowls and brings out dishes of shrimp with water chestnuts, pork stewed in soy sauce with dried vegetables and bamboo shoots, steamed eel, an eight-treasures vegetable dish, and rice, but the heat swallows my hunger. I would prefer a few sips of chilled sour plum juice, cold mint-flavored sweet green bean soup, or sweet almond broth. When Mama says, "The basket repairer charged too much today," I relax. If my father is predictable in his criticisms of me, then it's equally predictable that my mother will recite her daily woes. She looks elegant, as always. Amber pins hold the bun at the back of her neck perfectly in place. Her gown, a cheongsam made of midnight blue silk with midlength sleeves, has been expertly tailored to fit her age and Excerpted from Shanghai Girls by Lisa See All rights reserved by the original copyright owners. Excerpts are provided for display purposes only and may not be reproduced, reprinted or distributed without the written permission of the publisher.</anon> </opt>

In prewar 1930s Shanghai, carefree sisters Pearl Chin and younger, prettier May are the "beautiful girls" whose images on posters beckon viewers to buy products. They openly scoff at their parents' superstitious, old-world ways, but they soon learn that the good life is but an illusion. The Japanese army's brutal invasion of the city makes their lives as beautiful girls impossible. Their businessman father loses everything to the ruthless mob, and to pay off his debts he forces his daughters into arranged marriages to Chinese men living in the United States. See is masterly in her powerful depictions of the prejudice and harsh treatment the sisters encounter as they try to assimilate into the strange new world of Los Angeles. Possibly the best book yet from the author of Peony in Love; highly recommended. [See Prepub Alert, LJ 2/1/09.]-Marika Zemke, Commerce Twshp. Community Lib., MI (c) Copyright 2010. Library Journals LLC, a wholly owned subsidiary of Media Source, Inc. No redistribution permitted.